You are here: Home / Stories / A Radical Act of Forgiveness 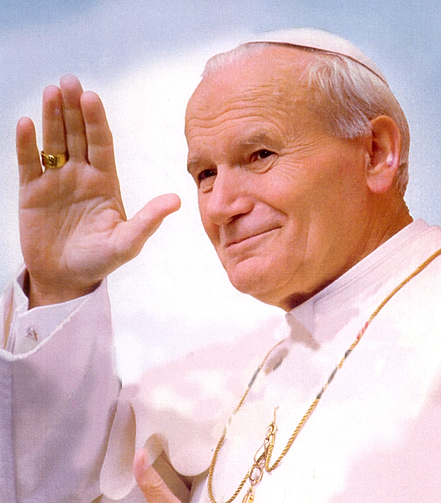 “It’s one of the greatest gifts you can give to yourself, to forgive. Forgive everybody.” –Maya Angelou

As Pope John Paul II enters St. Peter’s square to give his weekly address, an escaped murderer emerges from the crowd and fires four shots into the pontiff’s open car.

The gunman is a hired assassin and he is trained to kill.

The other two enter the pontiff’s abdomen and by fractions of an inch narrowly miss vital organs and a major artery.

As the badly-wounded Pope John Paull II is rushed off the hospital, security forces and a nun tackle the assailant, Mehmet Ali Ağca.

A fully-recovered Pope visits his would-be-assassin in a bare, whitewashed jail cell.

The prisoner kisses the holy Father’s hand. They speak quietly for 21 minutes alone.

In a radical act of love, Pope John Paul II forgives and pardons Agca and blesses him with a small gift in a white box, a rosary in silver and mother-of-pearl.

In the late 1990’s, the pontiff declared the year 2000 a holy “Jubilee” year, of which forgiveness was to be a cornerstone and expressed his desire that the man that tried to kill him be pardoned and released.

Pope John Paul II said, “We all need to be forgiven by others, so we must all be ready to forgive. Asking for and granting forgiveness is something profoundly worthy of every one of us.”

Have you been wounded by someone else’s harsh judgment or criticism of your voice?

Do you doubt yourself every time you open your mouth to sing, worried about what others might think?

Or perhaps you’re like me and suffer from self-inflicted wounds.

At my worst, I am my own assassin, sabotaging any forward progress I gain.

The assassin’s bullets are crafted from perfectionism, not feeling worthy enough, and self-loathing.

After years these things can take their toll. I’ve had the thought lately that if anybody treated me as poorly as I sometimes treat myself, they wouldn’t be around for very long!

Can you give your Self the gift of forgiveness? Can you choose to, “forgive everybody”?

Nelson Mandela, in addressing his supporters, said, “when you forgive you heal completely.”

In the past few years, as I began to forgive my Self, letting go of my regrets, I’ve healed open wounds and gained a new level of self-expression as a result.

When I choose to forgive, I see how heavy the burden is that I’m carrying around.

Releasing grudges and resentment has created a clearing in my life. It is in this new, empty space that I have the opportunity to create new inspiring possibilities.

Again, Pope John Paul II: “Forgiving from the Heart can sometimes be heroic…thanks to the healing power of love, even the most wounded heart can experience the liberating encounter with forgiveness.”

To get regular updates, vocal tips and announcements about upcoming TVF events, down our “Breathing Made Simple” eBook and join the TVF mailing list and community here.